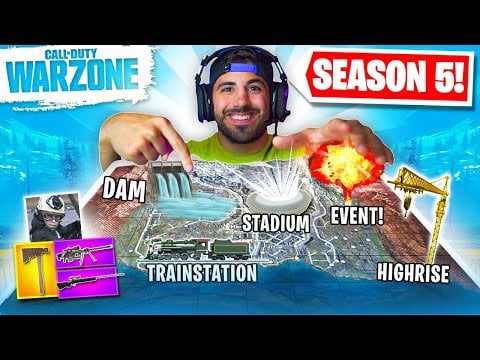 I was playing Warzone with my friend that day and we ended up in Farmland at some point in the game (I didn't memorize the clip so I can't tell exactly when). However, we ended up with the building shaded in red below, basically seeing an earthquake, the ground was shaking which made the screen vibrate, and there was a loud cluck coming from under the ground.

The buzz around the stadium right now indicates that it is detonated after the teaser that was sent to (Nickmercz) (https://www.youtube.com/watch?v=C0TQsK5m1rg), (TeePee) (https: // www .youtube .com / watch? v = ezDu1bR3pw0) and (Jackfrags) (https://www.youtube.com/watch?v=tfSozIZf3f0&). I don't think so, but I think the roof is open, to launch a nuclear missile from under it.

In the TeePee clip, the smoke / no matter as immediate as a bomb, sounds like a relatively slow burn, i.e. a missile being fired. Everything would have been shattered if a bomb exploded on the field, but it was not just a scream with smoke / fumes flowing into the room. The second reason that I think the bomb / missile is being fired from inside the stadium and not detonated, is the mid-season update 4.

This along with the clank / earthquake I passed the other day on farmland leads me to believe that the basement system is completely connected, and there was a bomb building under the map across the basement system, which all converged on the stadium, where it was fired from. Was the earthquake and earthquake on that day the bomb might have been moved?

These bombs / bombs could have been under construction during the Cold War period (associated with the new rumored CoD game) and Shadow found its location and concluded how to activate it. This leads to another discovery that I made (and I don't think I've seen this anywhere). Just east of the TV station (near the stadium again) there is a small building on the road. This building was previously accessible but no longer theoretically accessible for keyboard. If you look through the window at the far eastern door, you can see an office with lots of pictures on the wall, with a red lamp glowing inside. Another room similar to this can be found with a free camera in a bunker (I think it was cache 11). These may be associated with launch codes and may be part of another large Easter egg.

Sure, there is a live event in season five, what if the live event is to launch the missile outside the stadium and we all have a way to interact to achieve that via this potential launch room / rooms? What relationship do these currently inaccessible red rooms have with keyboards outside filled with pictures of rocket shelters / stadiums?

I would be interested in knowing if anyone else in the community has experienced the same growl / earthquake on the same site, or anywhere else on the war zone map, what do you think of this theory or if you have any of your own?